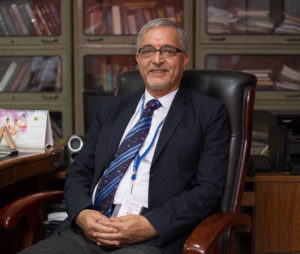 Prof. R.K. Khar joined B.S. Anangpuria Institute of Pharmacy as a Director on 31st March 2012. He is a renowned academician and a research scientist. He obtained B.Pharm and M.Pharm degrees from Dr. Hari Singh Gour Vishwavidyalaya (Sagar University) in the years 1971 and 1973, respectively, and was the University gold medallist in B.Pharm.

He was selected by Ministry of HRD, Govt. of India, for a Ph.D. fellowship under Indo-Bulgaria cultural exchange programme during 1982–1986. During the said programme, he visited most of the East & West European countries as a part of his academic programme. He served Jamia Hamdard for 37 years in the capacities of Dean and HOD of Faculty of Pharmacy, Dean Students Welfare, Placement officer, and Proctor.

He has been the Principal Investigator of a number of research projects funded by various government agencies & Pharmaceutical industries of more than 4.50 crores.